A Behind the Scenes look at our film ‘Shattered.’ 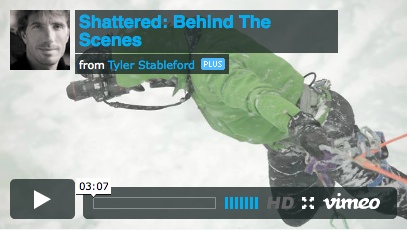 We are just gearing up for the NAB show, working vigorously to finalize our film which will premiere there on Monday April, 16th and will also play in our hometown at 5 points Film Festival and at MountainFilm in Telluride. In the meantime take a look at this Behind The Scenes film which shows just how much we put the new Canon 1Dx through. In addition to standing up to the weather I have to give this new camera credit for it’s low light capabilities. We were able to shoot a night scene for the film at 25,600 ISO!