The Farmers Series: Portraits of Integrity and Grace 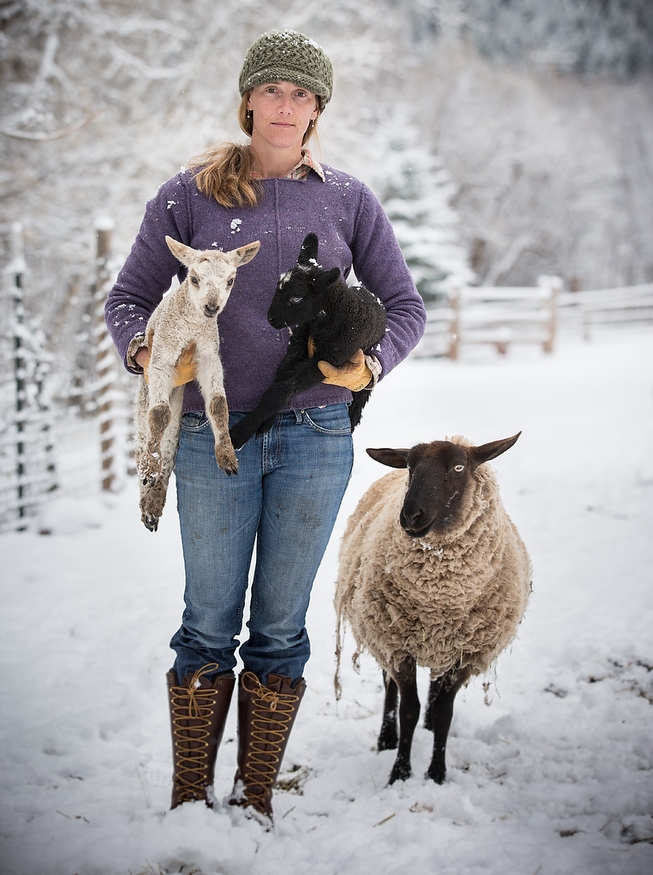 For much of this decade, one of my favorite passion projects has been “The Farmers” — a fine-art portraiture series featuring farmers and ranchers around the country.

Living in the small town of Carbondale, Colorado over the past 20 years, I have become friends with many local farmers and cattle ranchers. Their livelihoods are precarious—farmers work the land and pray for rain; ranchers struggle with feed prices and care for their animals every day of their lives. Both professions are often family-owned, and it’s common for two or three generations to work side by side.

Brook Levan is a farmer and artist who runs Sustainable Settings, a farm, research and learning center in Carbondale, Colorado. I photographed him in the greenhouse with freshly harvested vegetables.

I was inspired by the American photographer Dorothea Lange and her portraits for the Farm Security Administration (FSA) of Great Depression-era migrant workers during the Dust Bowl—her photos captured a sense of hardship that you just can’t walk away from. Today, for me, getting to know the farmers is what has kept me fascinated with this series. I think of this as a personal journey of discovery, and I don’t see any end in sight.

In this high-tech and high-speed age, I’ve been surprised to find that all the farmers and ranchers I’ve met have a real sense of grace and resilience, and even solemnity. I think this is partly because they all face the same set of perennial challenges of variable crop prices and capricious weather. It’s also because farmers and ranchers are in this career for life; there’s no such thing as early retirement when you work the land, and many of the octogenarians I’ve photographed have been working alongside their families in this profession since they were children. That work ethic seems to have instilled them with integrity, honesty, and patience. Heck, farming is also tough, and often lonely, toil — it shows in their faces.

Arturo Ortiz stands by his hay truck before feeding cattle in Carbondale, Colorado. I loved the quiet radiance of confidence and grace that he had.

So, I’ve kept “grace,” “resilience,” and “solemnity” in mind during these shoots. That said, I always seek to capture a farmer’s unique nature on each shoot rather than a theme I’ve created, yet these essences seem to come forward almost every time.

I always try to establish a heartfelt bond with the person I’m photographing, because I can’t capture an honest portrait unless the subject lowers his or her guard. Creating that connection has been especially important with the farmers because almost none of them had been professionally photographed before, so they were naturally a bit rigid at the start of our session.

But, I know very little about agriculture and livestock. I’m not a farmer—and my subjects aren’t photographers—so how could we trust and understand each other?

The first step was being honest with them. I explained what they’d gain by letting me photograph them on their land—payment for their time, and free family prints. I also used my phone to share recent images from my ongoing farmer series, so they could get a sense of the care and craftsmanship I was giving to each of these portraits. Then, I spent time asking them about their lives—struggles they’ve faced, their happiest moments, their lifestyles—and telling them about my own life and family. The important part is to find common connections.

Jim Nieslanik works the land on his family ranch in Glenwood Springs, Colorado. He and his two brothers moved to the area in the 1950s, and each one is still ranching and farming today. Although his birth date might reveal him as an older man, you would never know it by meeting him or watching him work.

Antonio Ortiz farms bananas on a plantation on the south coast of Puerto Rico, working most often with a machete. I photographed him while I was on the island for a presentation — I often tie in shoots for The Farmers series while I’m traveling for other projects. It’s a fun way for me to connect with new farmers, to learn about their profession, and to capture a portrait.

Rio is a 7th-generation rancher on Sunfire Ranch in Carbondale, Colorado, captured here with his grandpa, Bill, in front of their tractor.

When I photographed James Dixon, a rancher in Castle Valley, Utah, I knew that we both enjoyed horseback riding. So, I told him how I learned to ride and ask him about his riding. I’m not a great horseman, but he appreciated that I was curious about one of his passions. I also offered to photograph his three-generation family during our shoot and to make prints for them, so his father and his son came in from Moab to be a part of the shoot. This helped make our time together more casual, and put James in a comfortable place for our portrait session — and in photographing his family, we made a nice friendship that is still alive today.

I’ve kept in touch with James and many of the other farmers and ranchers I’ve met—and that has been one of the true rewards of this project.

Through the course of The Farmers series, I’ve photographed on a farm in Louisiana, a banana plantation in Puerto Rico, numerous farms and cattle ranches in Colorado, as well as modern farms and cooperative farms in New Hampshire, North Carolina, Missouri, Iowa, Utah, California, North Dakota and South Dakota.

Mother and daughter Kit (above) and Bridget Strang (below) run the Strang Ranch on Missouri Heights, Colorado, with a mix of ranching, farming and running an equestrian center.

I’ve taken portraits of female ranchers and female farmers, farming families and ranching families. I’ve photographed landscapes of organic farms and corporate farms, grass-fed cattle ranches, sustainable farms, collectives, and homesteads. And here’s why: The differences in local culture and history, and personality and lifestyle, that I can capture by visiting diverse locations is what creates a comprehensive visual story.

I used the Canon 5D Mark IV and Canon EOS-1DX Mark II as well as earlier cameras for The Farmers series, but I often think that lens selection is more important than the camera body. I often used the Canon 50mm f/1.2, the 85mm f/1.2, and a 135mm f/2.0 to create a shallow depth of field, and to bring the viewer in close to the subjects. I gravitate toward lenses that capture a sense of intimacy and, often, a connection to the landscape.

As for lighting, I used as little as possible, sometimes a reflector or a single Speedlite, and often nothing. That said, I was meticulous in selecting great locations and light angles on each farm where Mother Nature could do the heavy lifting with the lighting. Being photographed can feel awkward, and even more so when there are bright lights flashing in your face. If my subjects can’t relax, I’ll never catch that unguarded, honest moment.

Also, when photographing the farmers, I’ve found that providing direction is easiest when I’m within a subject’s “energetic space”—close enough that I can speak to them in a normal voice. That’s another reason I like using the 50mm f/1.2 lens so much, as it allows me to carry a normal conversation with my subject, standing just a few feet away, while I’m working with them.

Nicole Krautschun and her daughter Macy pause from the fall corn and pumpkin harvest for a portrait on their farm in Spearfish, South Dakota.

After I’d taken a handful of “Farmers” photos in Carbondale on my own, I flew to New York City and pitched the project to Canon. I expressed my passion for the project, but I also explained how this campaign would enhance their brand.

A young Annabelle poses with a spring lamb at Rock Bottom Ranch in El Jebel, Colorado. The only challenge with this shoot was keeping her from laughing incessantly when the lamb nuzzled and nibbled her ear! (Which, of course, was a good shot too.)

Canon wanted to showcase their new Canon ImagePROGRAF printers, so 40 farmer-portraits later, I printed a collection of three-foot by five-foot portraits on a ImagePROGRAF printer in my studio and displayed them at a Carbondale gallery showing in July 2014, and at the Photoville festival in Brooklyn that September, and at the PhotoPlus Expo in Manhattan that October. Plus, my team and I filmed a series of behind-the-scenes videos for Canon’s Digital Learning Center, which demonstrated lenses and cameras we used to get the shots. You can see the videos here.

In my previous blog posts, I’ve mentioned the importance of choosing a theme word or mantra for each shoot, so that I have a reminder of the spirit I want to capture in each image. For The Farmers, I selected “radiance”—radiance of their soul, of the struggles they’ve faced, and of their triumphs as people who make their living from the land.

But, I didn’t worry about casting “pretty,” “rugged,” or “radiant” farmers and ranchers. Everybody has a beautiful, radiant side to them, and I trusted that I could coach each person into letting that part of his or her personality shine through.

For example, my 2016 shot of Bruce Turnbull and his horse Twister won a spot in Communication Arts magazine’s Photo Annual issue. He’s just a normal person like me and you, not the Marlboro Man, not a model.

Archie Blackwell is a longtime cattle rancher, retired Texas Ranger and U.N. peacekeeper, with all the stories you’d expect to accompany such a full life. And he loves old tractors!

So how do you coach your subjects into showing “radiance” when you’re ready to press the shutter button?

I found that it can be done in a few steps, and here some tips:

This farmer, Leonard McGee in Folsom, Louisiana, was 80% blind from glaucoma. He had a deep spirituality and a beautiful sense of peace about him. My favorite shot is this one of him with his eyes closed in a moment of reflection.